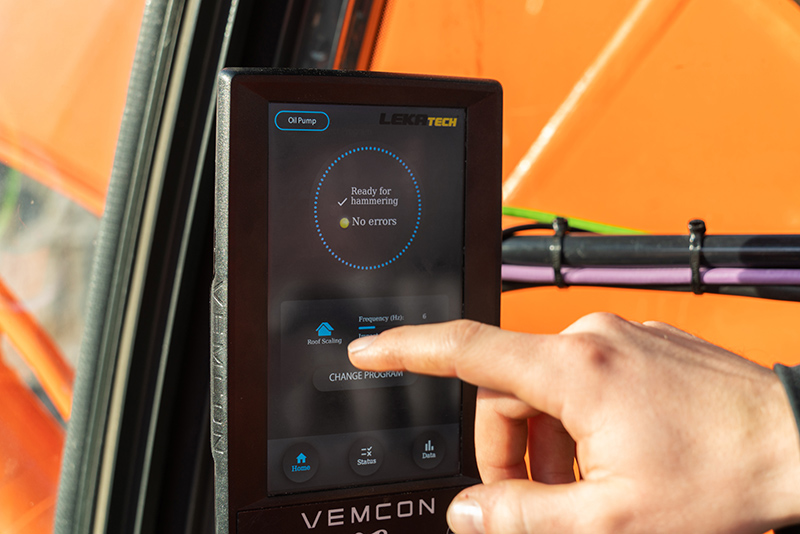 Lekatech Oy was founded 2018 in Kausala, Finland. Lekatech's mission is to revolutionize hammer and other attachment technology. The Finnish startup firmly believes that direct electric drive is the future in hammer technology as well. Vemcon GmbH is a developing and manufacturing company of machine control for work machines. Its CoPilot system is a modular technology platform that offers several functions which are available for excavators markets. With the integration of the Lekatech app in to the Vemcon platform, users can now select different application modes.

In addition, the app allows users to combine different frequency and energy settings for the electric hammer. At the same time, the user monitors data coming from the electric hammer at a glance. The app can be used to collect the hammer’s operating hours. It has also various safety functions and warnings. E.g the hammer will stop automatically in the event of a fault.

Vemcon founder and CEO Jan Rotard: "Our CoPilot system sends all data to the respective fleet management system used by the contractor when required. In doing so, all components can be individually combined with each other by the user at any time and expanded almost indefinitely."

IoT meets Heavy Machinery: Vemcon rethinks machine controls and simplifies processes on construction sites as well as in the execution of construction projects through digital solutions. Founded in 2012 by Jan Rotard and Julian Profanter, Vemcon solves fundamental challenges of its customers, for example, reduces costs on construction sites, optimizes work processes and in this way counteracts the shortage of skilled workers. Vemcon offers manufacturers uncomplicated new sources of revenue. Around 20,000 machines worldwide are equipped with Vemcon technologies. Customers of the Munich-based company, which has around 50 employees, include Kiesel, Kinshofer, MTS and Sennebogen. More information at www.vemcon.de.

Lekatech Oy is a Finland based company and a pioneer of electric technology. As an industry manufacturing of mining, construction and quarrying machines. Lekatech has developed the linear electric technology for hammering applications which is unique in the world. The company is growth oriented recognized by several European funding instruments and by some globally leading OEMs and end customers. More information at www.lekatech.fi.